this train of thought is inspired by his latest video…

In this video, he very possibly trumps his video of walking on the Great Wall of China or his videos of dunking at NBA All Star games. In his most recent video: he makes an appearance on the Jerry Springer Show- and he literally clowns!!!

check the video out:

Jesus has a history of making some eye-opening media. He’s been on the cover of news papers in Asia and Mexico for international acro-dunking, he’s been on television shows such as Ripley’s “Believe it or not” and “The Best Damn Sports show” performing acro-dunking, and not that I’m jealous or anything- but he also has a picture with Beyoncé from dunking at the NBA All Star Game.

We often talk about how a person’s image in media can travel so far- while the individual can still feel confined to the place their mission started.

We’ve come a long way since first meeting in 7th grade. But two things have been consistent: his connection to Oakland, and his lack of connection to the earth- because he’s always flying off of trampolines!

We’ve come together to produce a number of videos, here are some notable 1’s…

First and foremost, here is a video from the belly of the “Hyphy Movement”. E-40’s record release party in Emeryville. This video put a lot of things on the map- including elephants going dumb …Check out the Video

And since we’re on the topic of dancing… Here is a video of one of the many turf- dancing battles we used to attend:

And for some reason- the Oakland A’s Mascot “Stomper” dances a lot like my home boy in this clip from the mid- summer classic All Star Game in New York July 2008. hmmmm… too bad we’ll never know Stomper’s true identity (wink-wink)  Check out this video of B-Boy Stomper

We even came together to make a documentary, in which he talks about everything from acro-dunking to manhood and how everything in-between is interconnected… here is a clip from the documentary titled “He Dumb in The Air” :

There is an endless list of entertaining videos of this young man- (for more checkout his youtube page: 21Seus) each with an aura of entertainment and education, sprinkled with a sample of strong spirituality. It’s funny, we always talk about how someone’s image can travel through the media, yet that person might feel as though they haven’t gone anywhere. Looking at these videos- I can see how just how far he has come. I can see how far I have  come. The only thing I can’t see… is how much further we can go…

We have a saying: … a little something to remind us that the sky is the limit- and when we get to that height- we will have created something that will last forever…

“Meet me at the top of the pyramid bruh.”

Who would of thought that one day DJ Biz Markie would spin records in front of the US Capitol building in effort to save the environment… On Wednesday February 24th, that happened. And I was there.

News cameras flashed. Any news outlet you can name was on hand, as a solid contingency of all races and ages roared in support of an environmentally friendly economy. In the foreground was the Hip-Hop Caucus‘ bus- fresh from a road trip which spanned spanned from the boot shaped state of  Louisiana to the diamond shaped District of Columbia. And in the background, was the United States Capitol Building. A symbolic stance to say the least.

Many grassroots organizations pitched in to organize college students and elders, and their efforts paid off. The event created a news buzz and got a number of people talking about the concept of a green economy; a concept which is far from new.

However, It got me to thinking: how do we make this movement toward a environmentally friendly economy evident to individuals in the inner city?I asked legendary DJ Biz Markie, I asked head of Green for All Pheadrea Ellis Lamkins, I asked the Hip-Hop Caucus’ Rev. Yearwood, and I also asked Congressman Carson from Indiana.

Paradiseexit.com‘s Dominique DaCruz of captured a portion of the event on video; and Congressman Carson addressed my question head on. He spoke on making it transparent to people in the inner cities that this “green movement” isn’t just white people trying to save the environment, but this is the future of the American economy. We as economically marginalized citizens of the inner city- can’t afford to miss this opportunity to ride this green wave.

I don’t believe this information has become evident to the necessary people. However, this conference was inspiring in terms of the energy, and if this can continue to go from hood to hood, as the Hip-Hop Caucus has done with its “Green the Block” movement, maybe- just maybe those in an economic bind will begin to seek employment, skills, and ownership in the realm of a green economy. 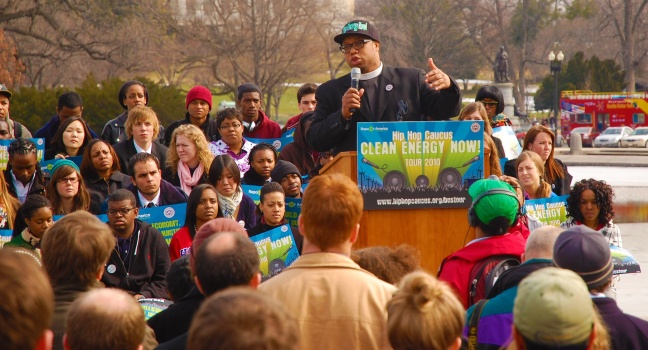 Reverend Yearwood of the Hip-Hop Caucus speaking to the crowd 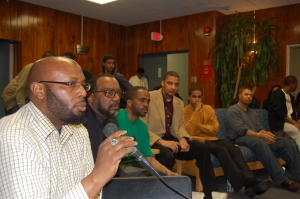 In effort to answer these, and other questions… We sparked a blunt

conversation about the topic of marijuana.

Hemp, one of the most durable fabrics in the world, seems to be intertwined with the fabric of American society. Marijuana is found in science labs, street corners, in the coat pockets of those who work in the corner offices, and in the jean pockets of college kids striving to earn a degree-that will land that job with a corner office.

At the Charles R. Drew Hall dormitory on the Howard University campus, there is no difference. In response, we at Drew Hall decided to have a panel discussion where students could hear voices of reason and also voice their reasons as to why they smoke…. The discussion was titled “Marijuana, Beyond getting High”…we even have a video

and here are some pics… 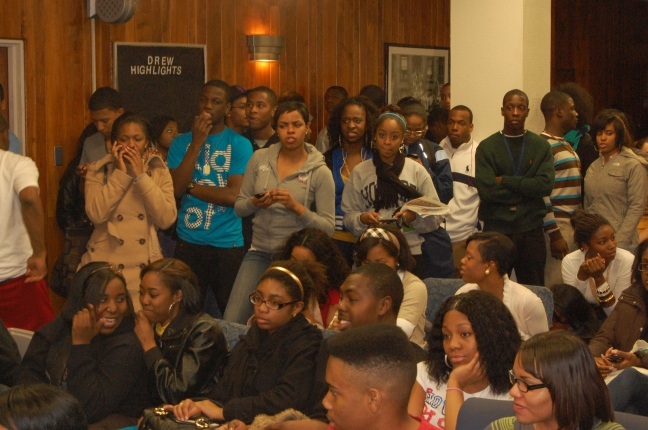 In the end, the panel discussion served its purpose in getting people to speak about marijuana openly…but we might have opened a pandora’s box…I just hope people think critically about their actions- as opposed to just going with the flow…