She spat in my face.

It was a mist. It caught everything from my left ear to the left side of my lip.

I left the store, and hopped on my bike with a 6-pack of beer and a plan. I did upwards of 20mph in the bike lane on Grand Ave in Oakland’s Adams Point Neighborhood; 6-pack in my right hand. Focused on getting to the house party and not dropping the beer.

A college classmate, D’Auria Henry was waiting on me about a block away from the house party we were set to attend. When I got to D’Auria’s car she hopped out and noticed I had on my Howard University sweatshirt. She said she doesn’t travel without hers, reached into the car and grabbed her garment. After grabbing the threads from her car, she reached in again to grab a dish of banana a pudding that she had prepared for the potluck/ party we were set to attend.

As she reached in the car, a white lady– 5’6 with matted black hair and a backpack, came walking past. The lady said, “I’ll throw a flower at you!” As she announced her action, she stayed true to her word. She tossed a flower in D’Auria’s direction. I saw it all happen. Didn’t flinch. I laughed– or better yet: I silently chucked and smirked.

The lady continued toward me.

There was enough room on the concrete for her, or any normal person to walk by. A sizable amount of space didn’t prove to be enough. As she crossed my path, she waited until she was completely adjacent to me. Left side. Further than my arm’s reach, but close enough for the stretch of saliva.

She spat on me.

I don’t remember the obscenity she said as she did it. I’ll never forget the shock hitting my stomach, nor the spit hitting my face. I was frozen. She took another step. She was now on my blindside, almost completely behind me.

I turned away from her. Toward the street. Still straddling my bike and holding my beer in my right hand.

I turned 180º. Not thinking. Reacting. I reeled around and launched my 6-pack of beer like a discus towards her. She was now about two or three steps past me.

My backwards frisbee toss of a 6-pack of beer connected. It hit her left side–gently. And then the entire case crashed to the concrete. Shards of glass and beer suds scattered.

That wasn’t sufficient. I dropped my bike.

I started after her. Taking took two or three steps in her direction “You spat in my fucking face!!!” I was yelling. I don’t yell often. When I do: I YELL!

She looked back at me, as her body gained momentum in the opposing direction.

Going from a walk, to a light jog and then a full run– she looked back at me and said: “You’re a fucking racist!”

I stopped. Right then and there: I was guilty.

I was guilty of being a racist. Assault with a deadly weapon. Armed robbery. Attempted homicide, kidnap, rape… whatever she wanted to throw at me.

If an officer had rolled around that corner at that very moment, it is very likely that I would have been arrested. If not shot.

I didn’t see it coming . Didn’t provoke it.

I was just straddling my bike. Headed to a party on a Saturday night:

In pursuit of my happiness.

But I was racist.

I went back, grabbed my bike, used my undershirt to wipe my face; but I couldn’t wipe away the thoughts.

In many ways, African American culture is a reaction to being spit on. Many aspects of Black culture, both good and bad, are a direct reaction to the predicament we have been placed in as a people.

That Howard sweatshirt. That soul food dish. They are symbolic of African Americans getting disrespected, and then reacting in a way that is beneficial to us (and the larger society).

My violent reaction and vulgar language were an example of  what it means to be disrespected, and then reacting in a way that is detrimental to myself (and the larger society, maybe).

This combined with the stories I’ve been reading and writing about all summer: Oscar Grant and Trayvon Martin. Alameda County Probation and San Quentin Prison. Homicides of old ladies and little babies. It’s like turning on the TV or looking at a movie screen and getting spit on. And then walking outside and getting spit on.

We have to choose how to react.

Racism is only a belief… until it manifests in the streets.

D’Auria lightheartedly said, “that crazy white lady wasn’t that crazy: she was smart enough to run!”

We laughed it off, purchased some replacement beer from Whole Foods and started toward the party. Passing back over the scene of the crime, I stopped to kick the shattered glass off the sidewalk and into the street. A Caucasian couple walked past. The lady of the duo thanked me for cleaning up the neighborhood. I laughed silently,told the couple to have a good evening, and then took off to my destination.

Just before D’Auria and I entered the house party, she looked down on the pavement: she found $60 folded on the ground. We split it.

My beer money was restored, and so was my understanding of racism.

(This audio piece and transcript was originally published at NPR.org by youthradio.org) 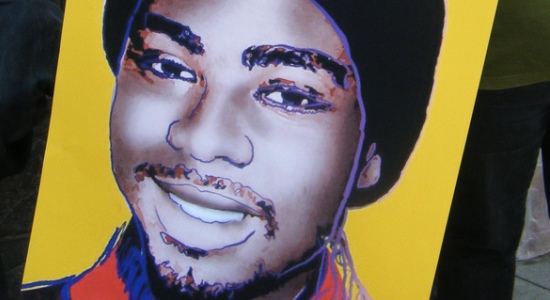 As part of NPR’s continuing coverage of the Oscar Grant trial, Youth Radio brings us this audio postcard — not from Los Angeles where the trial is happening, but from Oakland where the case began New Year’s Day in 2009. That’s when then-BART Transit officer Johannes Mehserle shot and killed an unarmed 22-year-old man. Last year, the city erupted with angry protests, some of them violent. And now that the officer’s trial is nearing a close in Los Angeles, Youth Radio’s Pendarvis Harshaw, an Oakland resident, traveled to three distinct spots throughout the city to ask how people are feeling about the case.