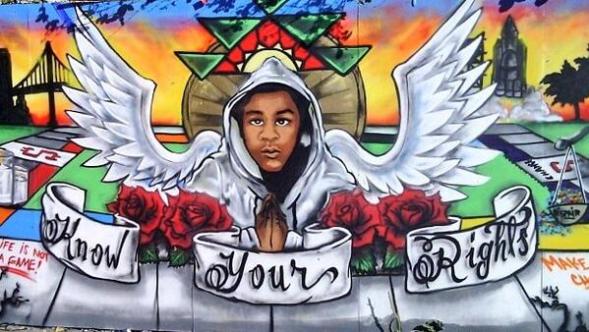 Why am I mad about George Zimmerman gaining celebrity status? I mean, don’t we celebrate murderers– all the time?

As my portion of the world turned to face the sun this morning, I read the news and felt as if I had been slapped in the face: DMX vs. George Zimmerman in a celebrity boxing match.

Like, this shit is cool? A guy shoots a kid, gets away with it– and now he’s a celebrity. I mean, come on… It’s Black History Month: we’re supposed to be celebrating our ancestors and forefathers. I don’t celebrate murderers!

Well… Actually, I do. And I’d argue that the majority of Americans do too.

“Yeah, I’ve killed somebody,” said a friend, during a casual conversation not too long ago.

The living room got dead silent. There were only a handful of us in the room– but mannnn, you could hear our collective interest growing. We wanted to know that story. My friend, a former Marine, told a bit of his tale of traveling the world, and spreading Democracy with bullets; the American way.

We didn’t “celebrate” the fact that my friend killed someone (and neither did he). But for that brief moment, while we indulged in his story, he was the coolest dude in the room. Hands down.

“Murder was the case that they gave me,” once said a young Snoop Dogg. And when Calvin “Snoop Dogg” Broadus beat that murder case, his popularity grew. And continued to grow. Is Snoop Dogg a murderer? Well, he beat the case. I mean– I don’t know if he actually killed anyone. I wasn’t there.

The fact is: a “gang member” (as the LA Times Article initially identified him), a man by the name of Philip Woldemariam is dead… and Snoop Dogg/Lion/Zilla is still making music. And he’s still a celebrity.

Speaking of celebrity rappers getting out of jail after beating a murder charge: Lil Boosie is set to come home soon! He’s currently serving an 8-year bid on a drug case. But while in the pen, Lil Boosie was facing a 1st degree murder charge. Torrence “Lil Boosie” Hatchet was accused of ordering Michael “Marlo Mike” Louding to be his hired triggerman. Well, Marlo Mike is now sentenced to life in prison without parole. Lil Boosie’s name is gaining a greater celebrity status as I write this … and Terry Boyd, a young Black man, is dead. But, #FreeBoosie tho.

I’m not saying Boosie or Snoop shouldn’t be stars for their talents– I just think it’s ILL that killing someone can earn you respect.

On the other side of the “famous because I killed” coin, are people like this guy named Watani Stiner.

I think Stiner has an awesome story. It’s a tale of the struggle for freedom, a shooting on UCLA’s campus and a father’s sacrifice for his family. I’ve interviewed Stiner before; I was only allowed to bring in paper and pencil. I’d love to interview Stiner on film/ audio/ oh hell, if I had a nice photo of him it’d be worth a thousand words. I think the world would love to hear about how he is serving a life sentence for the murder of two former Black Panther leaders, how he escaped prison, and then turned himself back in– for his family. But, the California Department of Corrections and Rehabilitation prohibits the media from conducting interviews with specific inmates, out of fear that the interview will cast that incarcerated individual into a world of stardom.

The amount of money the prisons are making off of Black men is astounding– but that’s a totally different story.

The crux of this story: “Tell me what’s a Black life worth?”- Tupac.

Look man, even if World Star Hip Hop gets exclusive broadcast rights, TMZ photographers catch first-row photos of the carnage, and they attach a GoPro to DMX’s forehead– so we can see a 1st person perspective of what some people might call justice. I wouldn’t watch it. I just don’t want to see that shit.

On the other hand, I don’t want to see a petition signed to end this fight— I’d rather see people valuing life.

… But first we have to value our own lives.

Oh, and here is a top ten list of celebrities who’ve killed someone. (Don King is on there, who knew?)