Athenian, my old high school, published an article on me and my OG Told Me project!!

An elderly man leans on a rail at a track meet, left hand on his hip, gazing at the sky. His expression says he has experience and he knows what’s up. He is Tommie Smith who gave a black-leathered glove fisted salute from the winner’s circle at the 1968 Olympics. “If you keep living, you have to keep changing with times, ” he says. 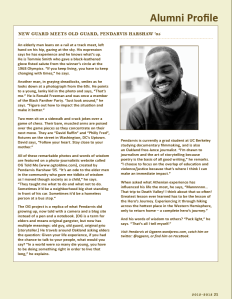 Another Man, in graying dreadlocks, smiles as he looks down at a photograph from the 60s. He points to a young, lanky kid in the photo and says, that’s me.” He is Ronald Freeman and was once a member of the Black Panther Party. “Just look around,” he says. “Figure out how to impact the situation and make it better.”

Two men sit on a sidewalk and crack jokes over a game of chess. Their bare, muscled arms are poised over the game pieces as they concentrate on their next move. They are “David Ruffin” and “Philly Fred”, fixtures on the street in Washington, DC’s Uptown. David says, “Follow your heart. Stay close to your mother.”

all of these remarkable photos and words of wisdom are featured on a photo-journalistic website called OG Told Me ( ogtoldme.com ), created by Pendarvis Harshaw ’05. “It’s an ode to the elder men in the community who gave me tidbits of wisdom as I moved through society as a child,” he says. “They taught me what to do and what not to do. Sometimes It’d be a neighborhood big shot standing in front of his car. Sometimes it’d be a homeless person at a bus stop.”

The OG project is a replica of what Pendarvis did growing up, now told with a camera and a blog site instead of a pen and notebook. ( OG is a term for elders and means original gangster, but now has multiple meanings: old guy, old guard, original griot (storyteller). He travels around Oakland, asking elders the question: given your life experience, if you had the chance to talk to (young*) people, what would you say? “In a world where so many die young, you have to be doing something right in order to live that long,” he explains.

Pendarvis is currently a gradate student at UC Berkeley studying documentary filmmaking, and is also a free-lance journalist. “I’m drawn to journalism and the art of storytelling because poetry is the basis for all good writing,” he remarks. ” I

choose to focus on the overlap of education and violence/ justice because that’s where I think I can make an immediate impact.”

When asked what Athenian experience has influenced his life the most, he says,” Mannnnnn … that trip to Death Valley! I think about that so often! Greatest lesson ever learned has to be the lesson of the Hero’s Journey. Experience it through hiking across the hottest place in the Western Hemisphere, only to return home– a complete Hero’s journey.”

And his words of wisdom to others? “Pack light,” he says. “That’s all I tell myself.”

One time, an OG Told Me: “We’re not getting older, we’re getting better.”

It made me think…

In life, there is beauty in growing old, why would I want to die young?

In America, why are we glorifying young death and degrading becoming an elder?

In Black America, If they don’t have fathers- where are they getting guidance about manhood from?

At 24, I find myself in this strange world called, “manhood”, you might have heard of it… but … not all of my homies made it, some of them never even heard of it.

So, once again I ask: How did I make it to manhood?

As a young man growing up in Oakland, Ca … I followed the OG’s. Religiously.

Their way of talking, thinking, breathing, and blinking… I studied that. Vigorously.

As an 80’s baby, growing up in urban America, surprisingly enough: I wasn’t the only one without a father. Eight of my friends were fatherless too. In turn, we came together as a brotherhood; a fraternal support group. This is sometimes called a gang, a posse, or a clique… na, we were just boys becoming men.

We would pick-up small insight into manhood ( i.e. ideas on approaching women, how to make money double, or even something as essential as: how to fight); we would bring that back to the boys and share the newly acquired knowledge.

From this, I quilted together my concept of manhood.

Through this photo essay, I wanted to recreate that quilt; and show the world my version going from boyhood to manhood.

The project takes the phenomenon that I’ve encountered throughout the process of growing up, and documents it- so now babies of the millennium can find concepts about manhood where they hang out: the internet.

A basic photo essay: head shots of elder Black men, with the addition of clever-wisdom laced quotes. This photo essay is not just documenting elders, no-it’s bridging the gap between generations. It’s giving young men an idea of what they might look like at a later date, and it’s … giving me insight to the problems that plague the black community.

I found a number of the issues that plague Black men in society through my OG told Me project:

– Total disregard for another man’s dream…

Through this same project, I also found some of the blessings that are found in Black men in society…

– A way of life that is unobserved by others- yet seen everyday: the invisible man.

-The natural occurrence of a rights of passage in the Black community.

The biggest conundrum I found myself facing during this year-long project: Finding the purpose of life…

All around the world people are living for two things: to get older and to get smarter.

This is survival. Basic survival.

However, where I grew up, people are living for two things: to get money and … to get money.

In result, our illusionary pursuit of money results not in getting older and getting smarter- no, it results in us dying young and dumb.

This is not survival. This is basic.

The aging process should be appreciated. It’s the beauty of life.

I haven’t made it all the way-I’m still growing, learning, aging- or as the OG told me, “getting better.”

And I’m enjoying every step of the way.

… And that is why I created this photo essay.

what exactly were those lessons that I was taught as I was growing from a boy to a man?